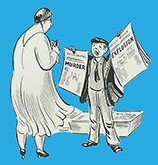 You may read below, for the history of the first chapter in the legacy of Good Morning - as written in 1968 by the esteemed Daniel Aaron.

Art Young’s Good Morning (1919 - 1922) barely had time to get going before it came to a crashing, financially unsound, stop.  But its legacy, and its purpose, struck a chord with a couple of Art Young fans...who thought “why the hell not” and resurrected the old beast, the Poor Fish, the fight-the-good-fight, find the unique point of view, poignant yet humorous tone of it all.

And on November 1st, 2015, released the 38th issue of Good Morning, Volume 4 Issue 1, after being founded by Henry Arthur “Art” Young in 1919.  So, yes, please call it a comeback.  After nearly ninety-four years, what else could it be?  Call it a comeback, and call it out to everybody you know.

Like other magazines impulsively conceived, inadequately financed, and espousing unpopular views, Good Morning had a short life. It was not an unhappy one, however, because its contributors and supporters were an unlugubrious set of people whose disenchantment with World War I and the aftermath had not convinced them that Americans would never laugh again.

“Now is the time to start a magazine,” Ellis O. Jones, formerly editor of Life and one-time passenger on Henry Ford’s Peace Ship, announced to a group of rebel artists and writers in 1919. Arthur Henry Young (1866-1943) agreed. Better known by his abbreviated signature, “Art Young,” he was one of the artists who helped to found the magazine in that year, and his report of its rise and demise· provides the fullest and most authentic account of its short history.

Most of the backers of Good Morning had written or drawn for the Masses until the government silenced that gaily truculent organ of dissent because of its opposition to the war. Some of them still served on the staff of the Liberator, founded in 1918 to sustain somewhat guardedly the cause of revolt. But Young, who with Max Eastman, Floyd Dell, John Reed and a few others had been twice tried and acquitted under the Espionage Act of 1917, now felt that he and his fellow artists deserved some recompense for their work:

I had considered it a privilege to draw for the Liberator. But a few of us on the staff who had always been         ready to contribute for nothing began to feel that it wasn’t quite right that engravers, paper dealers, and desk-editors should have their payor the magazine would not go on, while those who did the creative work had to forgo compensation. That was and still is a condition accepted by those who contribute to radical magazines which are not self-sustaining. Yet one’s individual economic responsibilities sometimes call for a more fruitful arrangement.

Hence he was receptive to the suggestion to “awaken the socialist spirit anew” among the war-weary liberals and radicals and at the same time to earn a little money.

Meeting at Allaire’s restaurant, an “old-time hang-out of the literati,” the founders discussed possible names for the magazine. Here is Art Young’s recollection of the proceedings:

Then I said, “Why not call it by some familiar name-some name that we hear every day?”

Ellis chimed in with: “Like ‘Good morning, have you used Pear’s Soap?’” which was an advertisement long familiar to the public.

“That’s it,” I said, “Let’s make it Good Morning.” There were no dissenters, and I began to sketch out a top for the editorial page (technically known as a masthead}--with a jovial figure personifying the rising sun as our emblem.

But the organizers still had to raise money-at least $10,000 according to the estimate of a knowledgeable journalist. Art Young, already in his early fifties “and a bit battered and sad to look at in my mirror,” was willing to undertake the job of canvassing prospective donors. Both the public and himself, he reasoned, needed “a new hold on life,” himself particularly.  Three months later, after hard soliciting, he had managed to scrape up less than half of the required amount, but ignoring the warnings of practical advisers, Young and Jones decided to publish the first number without the necessary cash reserves. On May 18, 1919, ten thousand copies of Good Morning were quickly sold. It looked as if the editors had won their gamble as congratulatory letters from friends poured in promising support. Five months later it was clear that Good Morning would not escape the embarrassments awaiting all such shoe-string enterprises.  Art Young, now in charge following the resignation of Ellis Jones, found it harder and harder to raise enough money to pay for paper, office expenses, and distribution costs. And none of the timeworn devices to restore ailing magazines-banquets, dances, and other promotional efforts succeeded in reversing Good Morning’s decline. He could count on some voluntary help, but even with the occasional handouts from friends, it was Young who had to write most of the editorials, supply most of the cartoons, and make up each issue. After October, 1919, Good Morning faltered, skipped a few numbers, appeared as a semi-monthly, and then folded in October, 1921. A final effort--a popular anti-war edition issued under the name of the Good Morning Publishing Company, sold well but not enough to encourage continuation.

It was evident, as Art Young wrote later, that he and his associates lacked the “certain hardness” and “pile-driving energy” successful publishing demanded. Yet Good Morning deserves a second look not only because it catches the mood of the liberal-radical generation between the collapse of Wilsonian peace hopes and the start of the Harding era, but also because it is a personal monument to one of America’s most original cartoonists.

The men who dreamed up a magazine in Allaire’s restaurant told each other that “satire and ridicule can be more effective weapons than solemn statistics and shrill denunciations.” Lincoln Steffens, fresh from the peace conference at Versailles, agreed. He urged Young to “keep Good Morning going. There’s nothing to do now but laugh-laugh like Hell!” Certainly the magazine found plenty to laugh at: xenophobes, super-patriots, war-profiteers, labor-fakers, prohibitionists, professional Bolshevik haters, hair-splitting lawyers, New Republic liberals, Woodrow Wilson, Mitchell Palmer, Warren G. Harding-everything and everyone, in short, that typified what Good Morning called “the chaos of hypocrisy” and “educated stupidity.”  Names already familiar to readers of the Masses and Liberator appeared in Good Morning (McAllister Coleman, Howard Brubaker, Clement Wood, Edna Millay, Louise Bryant, Robert Minor, William Gropper, Hendrik Van Loon, Alfred Dehn), but what kept it from becoming merely a pale imitation of its predecessors was the graphic wit and humor of Art Young.

He had come a long way since the days when he pilloried the Populists, approved the hanging of the Haymarket anarchists, and vilified Governor John P. Altgeld for pardoning those of them who escaped the noose. When Altgeld died in 1902, Art Young already felt deep misgivings about his earlier views. Eight years later he was a militant socialist who now refused to draw cartoons in support of ideas he no longer believed in. All the while he had been refining his technique, moving from a style reminiscent of Thomas Nast (whom he had briefly known) to a simpler and more economic one. As his social convictions sharpened, many of his drawings and cartoons became more pointedly and radically political, but he continued to satirize bourgeois fatuities with customary geniality and to temper his indignation with humanity and humor.

Good Morning is loaded with examples of Art Young’s most powerful and original work, some of it reprinted from Puck, Life, Metropolitan, and Masses but much of it new. Introduced for the first time is his cartoon series, “The Wisdom of the Poor Fish,” that droopy-headed arid goggle-eyed apologist for things as they are, the voice of defeatism and compromise uttering abject platitudes. An unforgettable cover for the May 22, 1919 issue depicts one old bum sprucing up his pal after a night in the park: “Gee Bill, you look like Hell.”  Bleary-eyed tycoons in “The Prohibition Question” wonderfully register degrees of drunkenness; the swinish guzzler in “The Last Supper” (Young’s brutal yet comic personification of capitalism). tilts perilously over an abyss as he satisfies his gluttony. Appearing intermittently are Art Young’s impish fantasies, “Post Cards from Hell.”

Pervading these and other drawings is a kind of old-fashioned social democracy, suggestive of an earlier egalitarian America, and a covert sympathy for human foibles. Young’s plutocrats are usually more ridiculous than evil. If the “Brutal Legalism” of a Mitchell Palmer provokes his rage, the sweating capitalist labelled “Commercial Aristocracy” who is digging his own grave does not. The pharisaical Woodrow Wilson who jailed Eugene Debs comes in for some knocks but not the moribund President rejected by his former supporters: ‘The rabble too have discarded their ‘heroes,’” Young remarks, “but they are slower to act about it and more decent.”

Not all of Art Young’s drawings and jokes in Good Morning are political, of course, and his charming animal cartoons, spoofs of modern art, and graphic commentaries on assorted American types indicate the further dimensions of his interests. But at this time he regarded himself primarily as a reformer who proclaimed through his art the message of “Socialized Living” preached by the great reformers s from Christ and Plato down to the Bolsheviks. His principal subject was “Man under capitalism,” a Chaplinesque figure-”tricky, blustering, cowardly, boastful, fawning, generous, pathetic, and ever hopeful.” This was also Mark Twain’s view of “the damned human race,” and there is something autochthonously American in Art Young’s satire that reminds us of the great humorist whom he so much admired.

He never, however, shared Mark Twain’s ferocious pessimism, even during the bleak thirties when the causes he believed in and defended barely survived. The Art Young who edited Good Morning, the hater of cant and cruelty and injustice who tried to reprove and improve his countrymen but no one person in particular (“And who am I to be the monitor of another’s actions?”) was forever casting “the mantle of charity” over the victims of his satire. What distinguished Good Morning from most of the shriller radical magazines of its own day and later was not its objective, “the surrender of capitalism,” but its ebullient tone, its dedication to “life” and “laughter.” It demonstrated a truth, insufficiently recognized in certain quarters today, that social satire can be mordant without becoming either sour or cantankerous.